Tomorrow (May 9th), Konami have said there will be a full reveal of PES 2019. Last time they said this was 2016 and it was just a date along side a poster with a new logo so i wouldn't expect to much.

Also, read the following and believe what you want

A since-removed leaked listing on the Hong Kong PlayStation Store revealed an abundance of features for PES 2019. It also answered what might be happening with the game’s license partnership.
According to the leak (via Evo-Web), a listing for PES 2019 appeared briefly on the Hong Kong PlayStation Store with a release date of August 30.
It also revealed a ‘Legend Edition’ variant of the title with David Beckham featured on the cover in what appeared to be his old England kit.
You can view the full list of new features from the alleged listing below:
AUTHENTIC LEAGUES: Huge addition of licensed leagues
NEW MYCLUB: Every element has been redone, from how you sign players, to special versions of players released throughout the year
MAGIC MOMENTS: Player individuality taken to the next level with 11 new skill traits, score great goals with improved shooting motion and animation and see stamina have an impact with Visible Fatigue
THE BEAUTIFUL GAME: Photo-realism with stunning animation flow in 4K HDR
ML REAL SEASON: Experience life as a real manager with 3 significant changes: ICC pre-season, in-depth transfer system and new league licenses

Just watched the reveal and had a read about the changes, all sounds rather promising! As long as they continue to build on the solid foundation that 2018 has given them then I will be happy. Would love some more information about the revamped myclub transfers as I hope that isn't a transfer market as such. A player led scout market I can get on board with but not a ultimate team style transfer market although it will be a good way to make money I suppose!

Now we just need some news on whether they have added some passing error to stop people one touch passing all the way from end to end with zero mistakes and defenders deciding to run the wrong way when you take control of them! If they make those changes and slow the gameplay down a touch I will be ecstatic! Looking very promising though!
PS4 ukexplicit1984 - Add me for PES games

Well, i take everything i read on twitter with a pinch of salt but the talk is there are 7 new leagues. Six are European.
"Establishing Communications"
Top

Lighting looks lovely and we've got evening to night matches as well.
Top

In the lane, snow is glistening 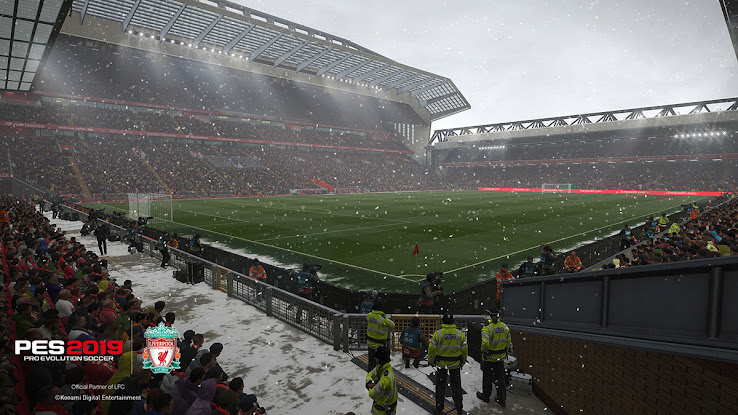 Has @Mike left the forum??

Anyway, they have just announced the seven fully licenced leagues.

Also, two more are being announced at a later date.
"Establishing Communications"
Top

Really wish they had included Norway! Reckon of the other two, maybe the MLS and Chinese Super League as they seem to be the most requested fake leagues in the option files (other than the out of reach Bundesliga of course)..
PS4 ukexplicit1984 - Add me for PES games

I tell myself that if they do have two more leagues and they are holding off announcing them, they must be decent leagues. But, also don't wanna set myself up for a disappointment

1 to 4 are all owned by EA. 5 is a tricky one. Not even EA can get the rights to this team. I did hear that the CSL was bringing out their own game? And 6, while requested, it is really worthy of its own announcement later on?

Maybe some South/North American? Nothing i really give a stuff about to be honest. The Japanese one?

Also, Norway? Just out of interest, why Norway?

Mainly so I don't have to ask Mike to make Rosenborg again so I can relive my sensible world or soccer glory days and take them to the top of all football again!

As for the other leagues, a lot will depend on if konami worked something out with Ea to relinquish the champions league rights. No matter what statements they put out I can't see konami would give up their ace unless they could get something substantial for it
PS4 ukexplicit1984 - Add me for PES games

I can't see Konami and EA agreeing anything. I just think that Konami look at it as in, what do they get for the CL license? Does anyone buy PES for the CL license? Unlikely.
So why not give it up in exchange for a licenced Portuguese and Argentinian leagues, seven new leagues and whatever new stadiums we get? If i was offered one or the other, i know what i'd pick.
Also, hopefully they will add more teams to the Other European Teams section now. Will be a bit lighter now they've added new leagues. Also, one thing Konami could try and do to make people happy is to add Celtic Park. People have been asking for that on FIFA for donkey's years!
"Establishing Communications"
Top

MotherHen wrote: ↑
Thu May 24, 2018 1:58 pm
So why not give it up in exchange for a licenced Portuguese and Argentinian leagues, seven new leagues and whatever new stadiums we get? If i was offered one or the other, i know what i'd pick.
Also, hopefully they will add more teams to the Other European Teams section now. Will be a bit lighter now they've added new leagues. Also, one thing Konami could try and do to make people happy is to add Celtic Park. People have been asking for that on FIFA for donkey's years!

Lets face it, if they want to make people happy they would up the power of the editing suite and give you free reign to create and share whatever leagues, teams and kits that you want to make. Realistically, if they could allow for unlimited kit/image slots they could get away with what they have now and just let the community go crazy.
PS4 ukexplicit1984 - Add me for PES games

Anyway, they have just announced the seven fully licenced leagues.

Also, two more are being announced at a later date.


Is that really true about @Mike ? Sorry to hear that. He's a great guy and his hard work on the OFs have been much appreciated. Thought he'd mentioned life away from PES was getting very busy for him.

Interesting stuff about the new leagues. Some fairly obscure teams to try out. Guessing it's the long process of hunting for news and reading speculation until we find out what teams are in the game and what the editing options will be.

BTW @MotherHen, have you managed to get over Saturday's goalkeeping horror show? God man, I couldn't believe it. Would have felt dirty scoring that first goal on PES.
Top

Nice to see you back Bungle! Saturday was a nightmare. But, maybe Klopp will open his eyes and buy a new keeper. Karius can be a number 2.

People have been guessing on social media what the other two licensed leagues would be. I thought one would be La Liga but Madrid is exculsive to EA for another 12 months so its not that.

"This notice is made in relation to the license for “PRO EVOLUTION SOCCER 2019”, which is now available for pre-orders.

I'm disappointed to say the least but I imagine Konami will crowbar most of the players into the various national teams. Anyone they sign this summer already on the game will be included on the disc as it will likely release with the same squads as PES 2018 and have a day 1 patch and update to correct them all.
Bury FC
Top
Post Reply
48 posts

Users browsing this forum: No registered users and 0 guests